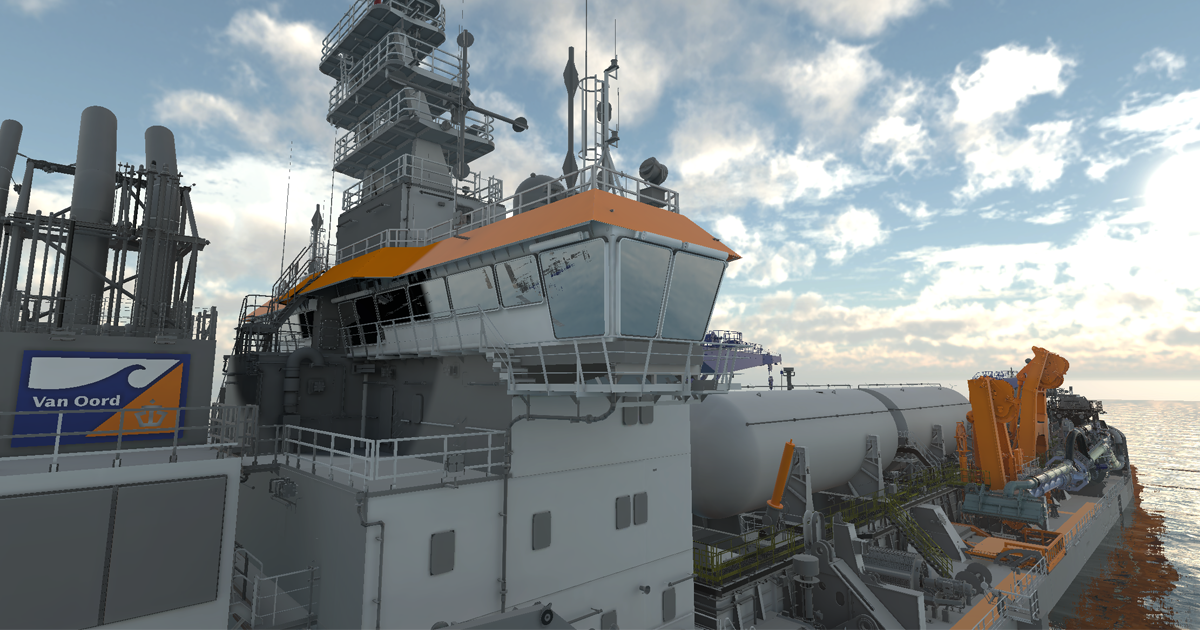 As a maritime contractor, Van Oord has broad international experience in the field of dredging, offshore and offshore wind. Van Oord has a long and proud tradition of combining engineering expertise to build offshore wind farms, prepare the sea and ocean beds and create new land for a wide range of commercial and public projects.

Autocad files are used for the development of the different types of ships. These files are often too large and heavy to be used for Virtual Reality, Augmented Reality or WebAR.

Models can be optimized in several ways. The challenge is to have as few vertices as possible in the model but not to destroy the overall shape.
Experts in this field in the Playmax team have applied various techniques to remove as many vertices as possible without damaging the general shape too much. The first tests of these techniques were trailed on a small piece of a ship. This was done in order to keep the general processing times efficient and have results as soon as possible.

Once the problem of optimizing CAD files was out of the way Van Oord and Playmax agreed to process a complete ship namely the Vox Ariane. The ship was baptized on the 2nd of July, 2022. For this event they wanted to make it possible for everybody to come and enter the ship in VR (Virtual Reality) and explore what the ship has to offer. Next to a VR solution they also wanted to be able to view the suction pipe of the boat in AR (Augmented Reality) via the Hololens 2.

Although challenging, knowing literally every screw and bolt that is present on the ship and the “vacuum cleaner” is present in the 3D model resulting in crashing most 3D software tools, we gladly took the challenge.

After different trails and errors the results were amazing and we could process the entire ship and suction pipe in vivid detail.

Van Oord requested extra realism and texturing to be added to the bridge of the Vox Ariane. This way people could walk around in the bridge and actually sit on the captains seat and enjoy the view. To get the best possible results, Playmax visited the Vox Ariane to take pictures.

The pictures had to be prepared for use in VR and for mapping over the various objects in the bridge. Preparing pictures includes recoloring, relighting, straightening, removing reflections and other tasks.

After texturing and mapping we also had to add lighting and shadow effects to add realism to the overall experience. This is not an easy job, for light to ‘feel’ realistic and run smoothly in VR, lot’s of optimization and testing needs to be done. One problem for example was that everything in the model was perfectly straight, this caused unwanted glitches in the lights reflections shimmering of the edges and planes.

Great depth is added by applying different techniques with lighting and shadow. In the above example it is really clear that a lot of depth is missing from the composition. While looking at the unfinished example below the viewer can see a lot more depth and immersion coming from the lights projected on the objects.

Every object in the ship is assigned a material i.e. metal, plastics, glass, etc. Using specialized textures on these materials results in paint actually popping from the objects making it look like the metal is actually painted. This also makes it possible to implement realistic reflections based on the different type of materials within the scene. Again all these tweaks together compile into a more and more realistic looking and feeling environment.

During the development process, Van Oord was provided with a weekly update. In this way, the end product met Van Oord’s expectations and there were no unexpected turn of events.

During development we shared a few early builds so we could check with Van Oord if the whole user experience (Menu’s, navigation, scale, etc) were on par with their goals and expectations. They gave feedback that for them it was amazing to visit places on the ship that were either really hard to get to in real-life or not even reachable at all if you don’t have the right certificates. They were also impressed with the accuracy of the overall dimensions, they really felt as if they were on the ship.

Finally after finishing the main model, the bridge with high-res textures and the engine-room we added a few different sounds, an animated sea with flying birds and spinning wind turbines on the horizon.

Next thing was to embed the suction pipe into a set of Hololens 2 AR glasses. The VR solution had a lot more GPU power to calculate all the different vertices of the ship in comparison with the Hololens 2. Next to optimizing the 3D model of the suction pipe we had to implement logic and scripts to be able to manipulate the object with hand tracking. This would make it possible for the participant to place the 3D model of the ship wherever they wanted in the physical world around them.

The end-product was successful and enthusiastically received by every participant partaking in the Van Oord VR and Hololens 2 AR experience.